Tracking pixels in videos is typically studied as an optical flow estimation problem, where every pixel is described with a displacement vector that locates it in the next frame. Even though wider temporal context is freely available, prior efforts to take this into account have yielded only small gains over 2-frame methods. In this paper, we revisit Sand and Teller's "particle video" approach, and study pixel tracking as a long-range motion estimation problem, where every pixel is described with a trajectory that locates it in multiple future frames. We re-build this classic approach using components that drive the current state-of-the-art in flow and object tracking, such as dense cost maps, iterative optimization, and learned appearance updates. We train our models using long-range amodal point trajectories mined from existing optical flow data that we synthetically augment with multi-frame occlusions. We test our approach in trajectory estimation benchmarks and in keypoint label propagation tasks, and compare favorably against state-of-the-art optical flow and feature tracking methods.

Goal: Given a target pixel specified on the first frame, track that pixel across the whole video.

We call our method Persistent Independent Particles, because we treat each pixel as if it is a particle with a long-range trajectory, and we track each particle independently. Some computation is shared between particles, which makes inference fast, but each particle produces its own trajectory, without inspecting the trajectories of its neighbors. A side-effect of this is that we may compute particle trajectories for any given subset of pixels. For the visualization below, we computed particles at three grids of different densities.

Our method initializes a zero-velocity trajectory (copying the initial position across time), and then iteratively refines the trajectory, using local appearance costs, and a learned trajectory prior. Since it reasons over multiple timesteps simultaneously, it "catch" a target after it re-emerges from an occluder, and inpaint the missing part of the trajectory. 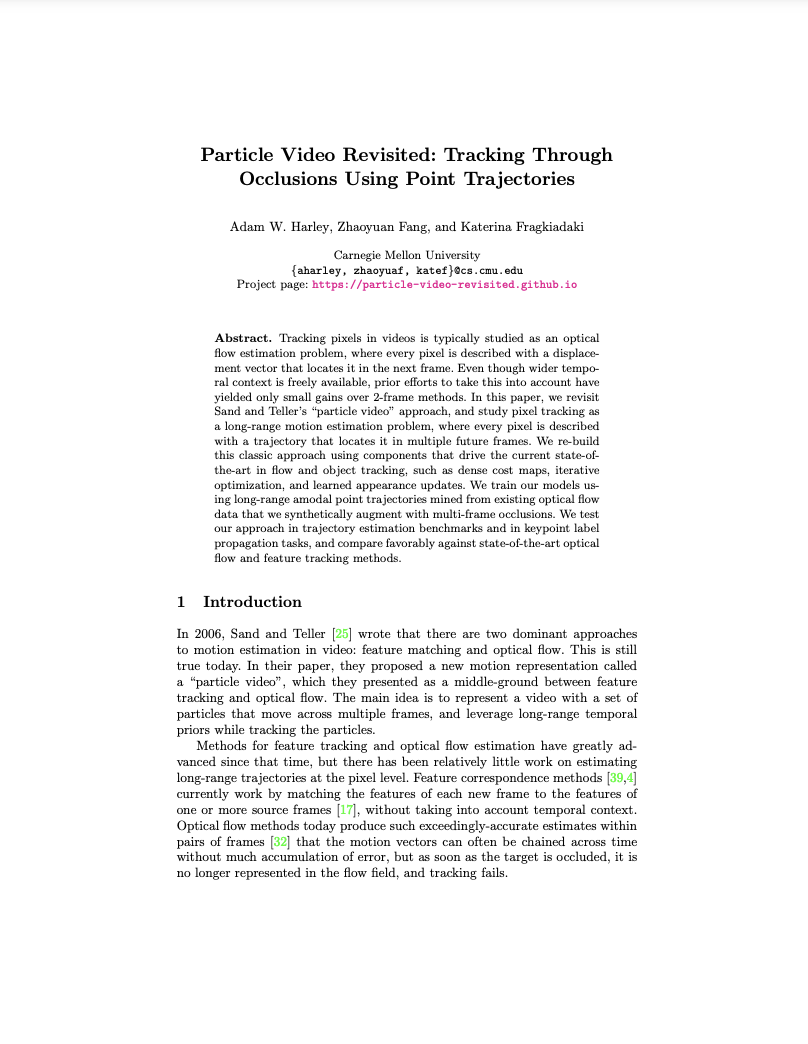